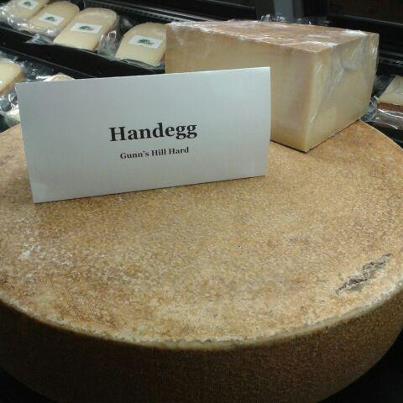 The names all tell wonderful stories about the cheese and the cheesemaker. The first cheese, Handegg, comes from the story of how Ysselstein spent months in the tiny Swiss Mountain town of Handegg, mastering his craft of cheesemaking. Ysselstein adopted the techniques and recipes of making Handegg in a similar way that the artisan cheesemakers of the Swiss Alps did. The second cheese, Five Brothers, is named after the five Ysselstein brothers. Ysselstein grew up on his family dairy farm working each day and evening alongside his four brothers John, Marc, Daniel and David. Together, with their parents, they built up the strong dairy farm that exists today and produces all the milk used in creating the cheese at Gunn's Hill Artisan Cheese. The last cheese, Oxford's Harvest, is a mild and creamy cheese that celebrates the local harvest that takes place within Oxford County, the Dairy Capital of Canada. Oxford is home to some of the most fertile soils in Canada and farmers have long been using their abundant and diverse crops to feed dairy cattle and produce milk. Each level of harvest is celebrated in Oxford's Harvest and it is the pleasure of Gunn's Hill Artisan Cheese to share this bounty.

Ysselstein hopes that now that official names have been chosen that they will soon become a part of household banter where families argue about who ate the last piece of the delicious Handegg, Five Brothers, or Oxford's Harvest!

For media inquiries please contact: Shep Ysselstein, 519-532-9189 or This email address is being protected from spambots. You need JavaScript enabled to view it.